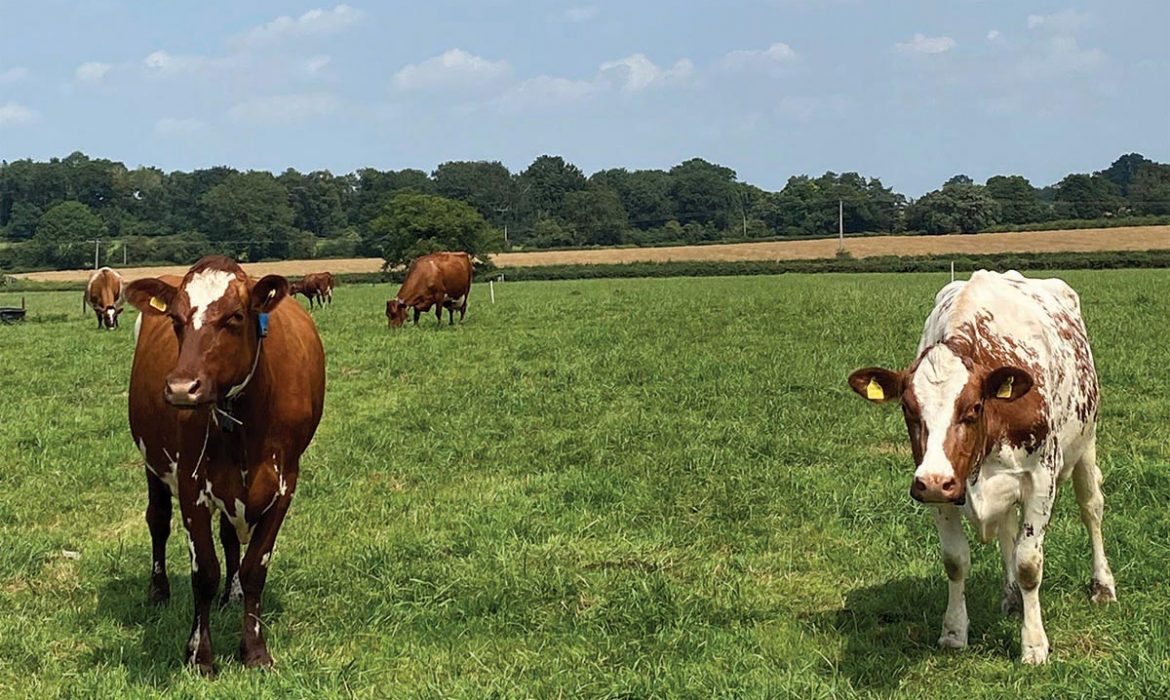 With unpredictable global milk markets, increasing consumer misunderstanding and varying levels of support for UK Dairy farmers, the challenges are mounting for the industry. But the Wyatt family, Twells herd, Snetterton, Norfolk are driving forward to achieve the highest standards on their farm with a firm focus on a sustainable and positive farming future.

The family have been breeding pedigree Dairy Shorthorns since the 1930s, having been founded in 1936 by Joseph Pearn who was given a dozen heifers as a wedding present. Today, grandson Jonathan Wyatt is running the operation with his mother Anne, after the passing of his father Tim in 2013. Twells has been a leading Shorthorn herd in the UK dating back well into the 1970s when the famous Twells Moss Trooper 4th stamped his dominant genetics on the breed worldwide. His huge success in Australia and New Zealand was one of the reasons that the World Congress visited in 2010. Since then, in the capable hands of Jonny the farm has changed significantly, moving from strength to strength.

In 2010 the farm was milking 120 cows; it now milks 240 cows in an 18/36 parlour that was installed in September 2014. This was the first major investment that has led to significant changes on the farm. Jonny’s aim was to increase milk yields without sacrificing the Dairy Shorthorn attributes.

“It is important that the cows are easy to look after and that they are healthy with good temperament, and the Shorthorn is just that. We knew the Dairy Shorthorn had the potential to perform, we just had to make sure everything was right. In the dairy industry all the little things add up and make a difference.” The benefits of the new parlour were quickly recognisable; milking time had reduced, so cows were milked more efficiently without extended standing time. The waiting area is spacious and has rubber matting on the floor for cow comfort, which reduces pressure on feet and the knock-on effects that can have. A new drafting system also proved fruitful, saving time dealing with cows that may require attention, and making serving cows a swift operation. Studies show that healthy happy cows make more milk more efficiently, which in turn lowers emissions.

The farm’s milk is contracted to Arla who have a Dairy Pledge to make operations carbon neutral from cow to supermarket by 2050, with a 30% reduction by 2030. This means that Jonny is constantly exploring ways to farm in a regenerative manner, ways to increase biodiversity and soil health and capture carbon, all whilst managing the cows in a precise manner that lowers outputs. “Shorthorns are an excellent grazing animal with low inputs, which makes them a super sustainable breed”. Sustainability is an area that Jonny is extremely passionate about and this is evident as they place in the regional top ten of Arla’s sustainable farms.

In 2015 a 500KW Anaerobic Digester (AD) was commissioned to harness the power of slurry as a source of renewable energy; the digester was up and running by 2016. This was a no-brainer addition to the business, as the AD produces fertiliser and biofuels that create another income into the farm whilst reducing the environmental impact. The digestate is used to grow grass and crops, which eliminates artificial fertiliser costs. “My firm belief is that we need to be as self-sufficient as possible, which will reduce our exposure to global markets in the future, and the AD plant is helping us achieve that and making us more sustainable in the long term.” AD is a carbon neutral process. For larger digestion units CO2 can also be captured and stored, or used in refrigeration, chemical processes, and food products, to name but a few examples. This in turn makes the whole process carbon negative, actively reducing the net amount of CO2 and doing even more to tackle climate change. Fun fact: Arla estimates that one cow can produce enough muck to fuel three households annually! 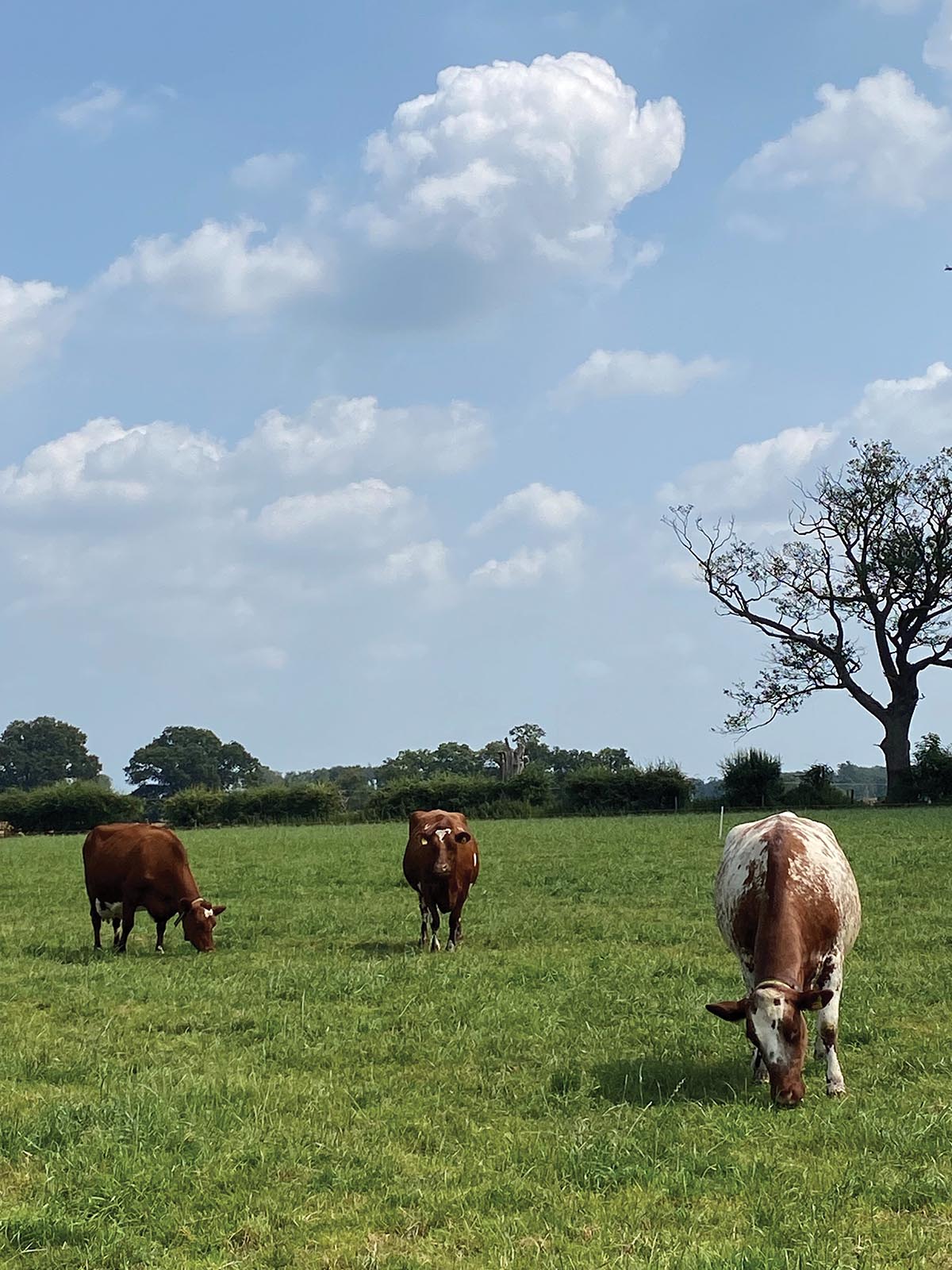 The farm is run by Jonny alongside his head herdsman Andrew Smith, calf rearer Molly Sellars, general farm worker Jordan and several relief milkers. They calve all year round with an Autumn bias to utilise the Autumn grass. Farming in Norfolk means rainfall is very low, around 20” per annum, so grass growth in the summer can be problematic to say the least. The cows are spilt into highs and lows and in March 2021 the farm went to three times a day milking, which gave an 18% up-lift in milk yields. At the moment service sires are Twells Viking, Cotonhall Cyborg, Oxton Clarity, Churchroyd Pure Class and Ballytrain Bullseye. During the past year SenseTime collars have been introduced as a management tool, one with which herdsman Andrew is highly impressed. They flag-up cows on heat and give a precise window for service. Andrew said that the “health features are an asset; a text message can alert me to any fluctuations in any cow’s movement or rumination, notifying me of problems before they are noticeable to the eye”.

Each and every animal on the farm is treated like a “princess” according to Jonny, and having a good team of staff in place is vital. This starts from day one; calves remain with the dams for the initial intake of liquid gold (colostrum) before being penned in small groups. “Calves have to be reared right, they are your future herd and will contribute to the bottom line; attention to detail is key for a healthy happy cow”. Vet visits take place weekly for PD checks and non-bullers, but the Shorthorns tend to be hardy, low maintenance animals with high health traits. Next on the cards to improve animal welfare is to move away from loose housing and invest in cubicles.

The herd has always been synonymous with quality breeding and it’s clear that the future at Twells is extremely bright, with the trials of new and innovative technologies that are conscientious towards climate change. The fact that UK dairy farmers have cut their carbon footprints by 24% between 1990 and 2015 demonstrates that UK farmers are the best at constantly trying to evolve and stay ahead of new challenges. Here at Twells this is paramount, and the new kid on the block is the Oxi-Tech Solutions Sanitization System. This system is designed to wipe out bacteria and viruses by using just water, low voltage electricity and a natural process called ozonation. This revolutionary tech has helped reduce the farm’s carbon footprint further by eliminating the need for peracetic and hypochloride acids, thus reducing plastic on-farm, in which the acids would have been contained, and also cuts out the transport of said chemicals. Alongside these environmental positives the Oxi-Tech has lowered the bactoscan and there have been no cases of mastitis, which can be spread by poor disinfecting of parlour equipment. The knock-on effect here has been that time is saved in the parlour as there is less or no time spent handling rejected milk or treating mastitis cases; this in turn eases the workflow. Cows are milked quietly and quickly, meaning they can spend more time eating or resting. It’s a win win!

This last summer Jonny and family have taken part in the ‘thousand trees in a thousand days’ project. Trees have far-reaching benefits; sheltering livestock, helping to reduce flooding and supplying timber, and they directly reduce carbon from the environment. Jonny saw an opportunity to make use of land that does not yield well on the farm, and planted trees, making the land more beneficial. “I want to plant trees from acorns that my son and I have collected and then in fifty years’ time he can look back and say, “this is what I did with my dad”. Future generations are learning to become custodians of the land from the generations before them. One thing is clear, and that is that responsible and strategic livestock farming will play an important part in minimising global warming, and here at Twells they are paving the way to net zero.