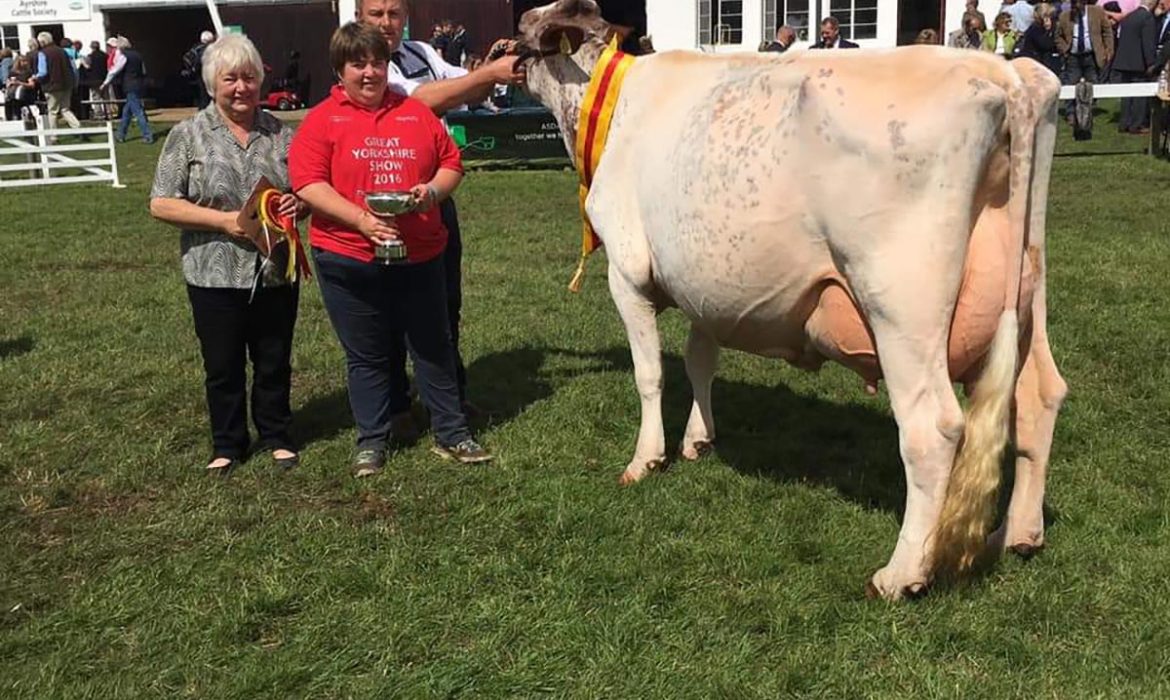 The Churchroyd prefix has become a household name within Shorthorn breeding circles with successes at major shows, chart-topping proven bulls in AI and record-breaking type classification scores. Indeed, the herd recently featured in Cowsmopolitan (the international multi dairy breed magazine) for the unique achievement of two consecutive generations of 97-point home-bred cows. However, all of this has been achieved from very humble beginnings on an exposed hilly farm in Yorkshire’s West Riding. 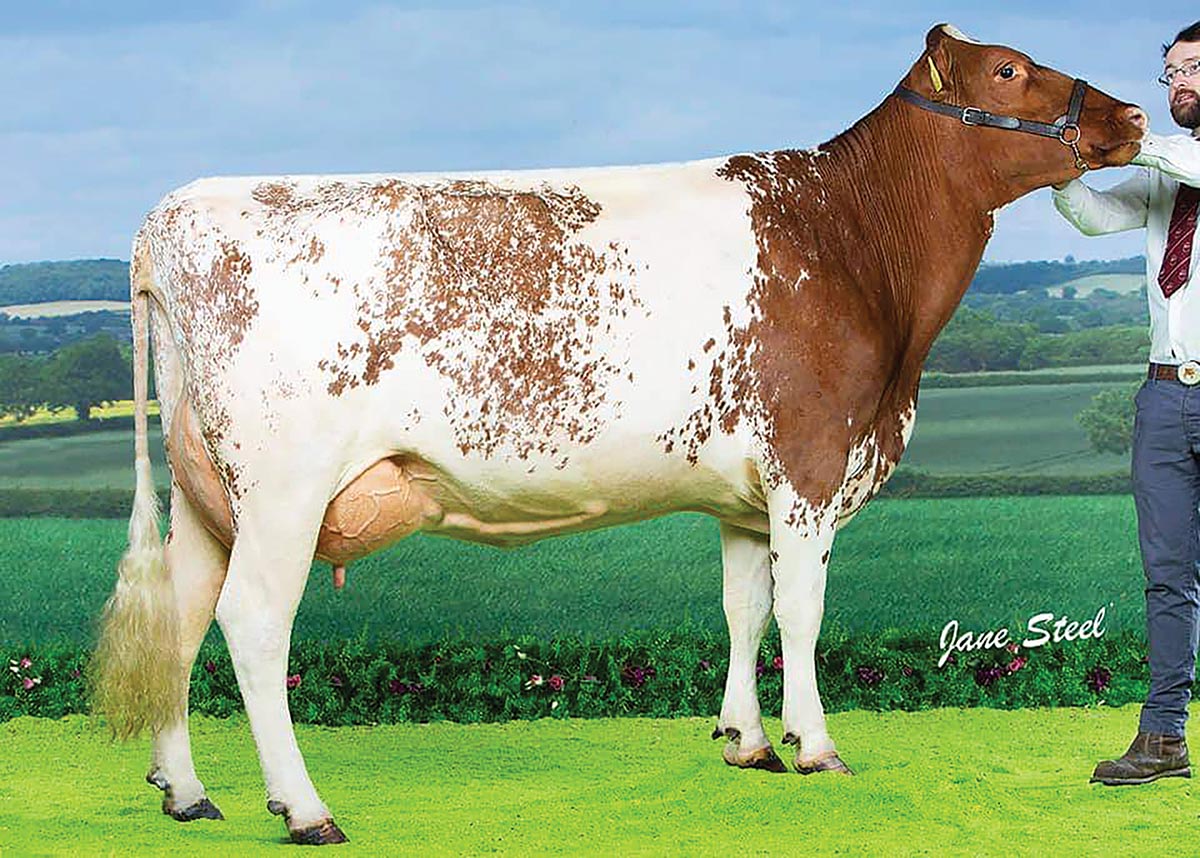 Richard and Mary Collins were married in 1967 and started milking a commercial herd at Church Farm, Lower Whitley near Dewsbury. After ten years of milking mainly British Friesians and some non-pedigree Shorthorns the couple decided that if they were to continue in milk production they wanted to go pedigree, and as they had both a connection to Shorthorns from childhood, the Dairy Shorthorn would be their chosen breed.

Early mentors to Richard and Mary were George Dent of the Winbrook herd and Billy Goodman, who managed the well-known nearby Kirklees herd. The Collins’ also had a very close friendship with John Hayward of the Hooton herd, a friendship that still endures between the two families to this day. The traditional Shorthorn attributes of the robust constitution and excellent feet and legs were well suited to the steep and exposed pastures at Church Farm, but from the outset the couple was determined to improve udder conformation, an area where they felt the breed was at the time lagging behind. Some great cow families have been developed over the years, the Peggys from Strickley, the Gentle family from Orchardholme, the Kirklevingtons from Hauxwell and the Bronte Wildeyes family from the Kirklees herd (the Bronte element of the name was added to differentiate from another Wildeyes line within the herd). The now-famous Heather family was graded up from the original commercial herd.

Along with their three young children Jill, Wendy and Ian, Richard and Mary would spend their leisure time showing their beloved cattle, the big family holidays of the year being The Royal Show at Stoneleigh, and of course the Great Yorkshire Show at Harrogate. Ian can well remember as a young lad standing at the bottom of a very large class at the Royal show. Such an experience can be demoralising for a young person but in Ian’s case it made him all the more determined to succeed, and in 1997 he proudly led Churchroyd Bronte Wildeyes 9th to take the championship rosette at that year’s Royal.

Tragedy struck in 2004 with Richard’s very untimely death. Richard was at the height of his career and was due to become President of the Shorthorn Cattle Society and his influence is sorely missed, however, he would have been very proud of the way Wendy stepped up to the mark in taking on that role and honouring her father’s memory.

At the tender age of 26, Ian had to take on the running of the farm and the breeding policy decisions for the herd. The results speak for themselves; the herd has gone from strength to strength, collecting breed and interbreed championships at major shows, the highlight of which was Churchroyd Peggy 19th winning Supreme Interbreed at the Great Yorkshire show in 2016, and she was also Champion at the National Shorthorn show in the same year.

Ian’s breeding policy is highly focused and uncompromising; he demands a cow with a natural ability to milk and he identifies cleanness of bone, openness of rib and silky udder texture as essential traits in a dairy cow. Udders must be well attached with correct teat placement, and at the same time, she must possess strength of frame and good locomotion in order to produce and reproduce. In the past, outside bloodlines have been used to improve udders and dairy character; in recent years, however, Ian has increasingly used home-bred bulls from their very best family lines with remarkable success. Earlier in the year, Churchroyd Heather 50th emulated the achievement of her dam Churchroyd Heather 29th to become the first consecutive generation of EX97 point cows of any breed in the world! Add to this that Heather 50th is sired by the EX96 point Churchroyd Victor (a son of Churchroyd Lady Barrington 12th EX95) and that her son Churchroyd Pure Class, who is in turn a son of Churchroyd Wild Card EX95, is currently the most popular bull in the Shorthorn Sires stud. Another major achievement this year was that Churchroyd Heather 107th, another daughter of Wild Card, became the second animal in the breed to score VG89 in her heifer lactation. Heather 107th is a stunning example of the art of the master breeder.

Although Ian does not actively select for breeding indexes, two of the highest PLI bulls in the breed are Churchroyd Wild Card and Churchroyd King Willie. The legacy of these two bulls will be felt in the breed for years to come through their daughters, and also their sons such as Pure Class and the popular Churchroyd Pharaoh (King Willie x Peggy 19th). Occasionally Ian will look outside the herd to add a new cow family and this was the case when he purchased Cotley Foggathorpe Lass 138th EX94 from the Tonelea dispersal sale in 2007. He then bred her to Churchroyd Victor to produce the bull Churchroyd Foggathorpe V EX92. After collecting semen from the bull Ian sold him at the society sale for a record price of 3,700gns. Ian is very impressed with the bull’s daughters currently milking in the herd.

The Collins’ are a very tight-knit family. Ian and Mary are backed by Wendy who relief-milks between other jobs, and Wendy’s husband James. Between them, they rear the young stock at Springfield farm near York, while Jill uses her accounting skills to keep the books. Ian’s children Harry and Molly are closely involved in helping on the farm and at the shows. Harry has just started a full-time course at Reaseheath College. At last year’s Great Yorkshire show Harry earned the coveted Young Handler Championship against stiff competition from all breeds. He then followed this up by becoming Champion Shorthorn Handler at the National Calf Show with Molly being tapped out in Reserve.